Review: Dinner with a Vampire by Abigail Gibbs 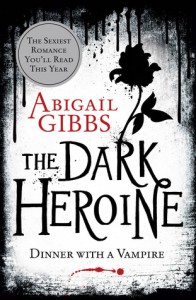 Any novel that makes it okay when the primary love interest threatens/attempts to rape his love interest is on my shitlist. Dinner with a Vampire is the topmost name on said shitlist for this and more. I slogged through 400 pages of this bloated, melodramatic mess before it became impossible.

There were dozens of dynamic opening lines I considered for this review, but that one in particular gets across exactly what someone is getting into if they decide to read this novel. Some people are only going to glance over the first lines of this lengthy review and I want to make what little they'll see have a serious impression on them. Despite receiving six figures for it, Gibbs' novel lacks any redeeming qualities and immature in its execution and characterization.

Right off the bat, we're hit with a lack of logic. Considering the police and Violet's dad already know about vampires and want an excuse to come after them, it's actually safer to let Violet go free than to keep her among vampires. She's kept more because the plot of the book demands it than because it makes sense. Even after reading the entire novel, I'm still not sure why Kaspar didn't kill her.

Violet, despite being the daughter of the Secretary of State for Defense, says "Vampires are monsters. Monsters do horrible things. Humans don't (Dinner with a Vampire, p. 39)." Has she never heard of Ed Gein? Charles Manson? Ted Bundy? Timothy McVeigh? Adolf Hitler? I could go on and on with all the humans who have done monstrous things. This is supposed to establish how in denial she is about what's happening to her and it works somewhat. What it does more of is establish what she is throughout the novel: naive and annoying. I can't remember any redeeming qualities she has.

The beginning isn't so offensive or cliched, but this doesn't last long. Kaspar's bed buddy Charity is almost immediately established as mean girl love rival number one. This happens around the same time the Kaspar/Violet/Fabian love triangle sets in. Then Lyla, Violet's insta-best friend, turns into a second mean girl love rival. Slut-shaming is everywhere, and it's portrayed as wrong when it's Violet being called a slut, but it's apparently right when it's Charity. What? NO. Double standards are not welcome here. Kaspar starts playing hot and cold, the antagonists are flat like paper, and it steals the "are you scared of me?" "I'm not scared of you" bit straight out of Twilight.

Unfortunately, this is not the only double standard of the novel. When Violet takes Kaspar's condoms as a prank, he responds by ATTEMPTING TO RAPE HER. This get brushed off and he remains the primary love interest. When another guy attempts to rape her and then kill her? He's evil.

WHAT IS THIS? Whether it's a vampire novel or contemporary novel or any other kind of novel, it is NEVER okay for the love interest/hero to threaten to rape the heroine, condescend to her all the time by calling her Girly, blame her for the terrible things he does to her, or do pretty much anything Kaspar did to Violet. The way she shrugs off all the bull he throws at her and still fawns over him? That is called RAPE CULTURE and it's dangerous. It's why society still says "she asked for it" when a girl gets raped or assaulted.

I know vampire lit. Dracula has been one of my favorites since the age of seven,. Vampires remain my favorite monsters despite the oversaturation of them in the current market and there is no counting how many vampire books I've read. I have written my own book centered on vampires (and nothing I have said or will say about this book has anything to do with professional jealousy, so don't even try it) because I love vampires so much.

I could wax about all the ways in which I establish the antagonist vampire in my book as evil, but the point: I never use rape to do it. Rape is THE cheapest way to portray a character as evil because it lacks effort and is beyond offensive. Really, what of the double standards? Another character is evil for trying to sexually assault Violet, but Kaspar is good and droolworthy when he does the same thing? This issue is never addressed.

This book reinforces the rape culture people like me have spent so much time fighting and makes teen writers such as myself look bad. If only I'd recognized that I read part of this when it was still on Wattpad as "Dinner with a Vampire. Did I Mention I'm Vegetarian?" It was awful then and it's awful now. I just have a better sense of exactly how bad it is. On the bright side, I didn't pay for this fat piece of badfic.

I received an ARC from the publisher via Edelweiss for review. Also, I hated this book so much that it took me five months to post my review of it here. Truth.