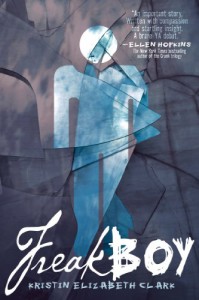 See more of my reviews on Birth of a New Witch! My copy was an ARC I received from the publisher.

LGBT YA is something we're always going to need more of. It's been on the rise the last few years and it's a joy to see LGBT books like Aristotle and Dante Discover the Secrets of the Universe taking home a bunch of awards. However,  I've personally noticed how YA tends to lean toward gay and lesbian characters and away from bisexual and transgender characters. If you expand to QUILTBAG (good lord, even I can't remember what all those letters stand for and one of them represents me!), it becomes clear how even as YA is growing, there are still so many stories it's not covering. Clark tells a story desperately underrepresented in YA and does it well, but it needs to really be hers.

All three POVs in this verse novel have something to add to the overall story, though some sections are weaker than others. Angel's POV, for instance, is the strongest thanks to how she has it all figured out already and shows us the intersectionality of race, class, and gender identity. A POC male-to-female transgender person from a poor background like Angel isn't going to have the same struggle a white upper-class male like Brendan is and thank goodness Clark recognizes this and makes it clear.

In comparison to Angel's POV, Brendan's and Vanessa's are a lot weaker. Brendan spends most of the novel complaining, worrying, and such about whether or not he's transgender. Vanessa's is the weakest of all because so little of importance is in her sections, but it's still important enough that she's an integral part of the novel. When someone comes to realize they are or may be transgender or gender fluid, the boyfriend/girlfriend, partner, spouse, etc. has their own set of problems to deal with. It's not as difficult as discovering your gender identity may not be what you thought it was, but it's pretty difficult to learn your loved one is going through that and not know where you stand with them anymore.

The great issue here is that this doesn't feel like it's wholly Clark's novel. It simply can't be when her style is so strongly imitative of the way Ellen Hopkins writes. If someone took twenty pages of this novel and twenty pages of any Hopkins novel and handed them to a reader blind to either author, there's a good chance they won't realize the samples are from two different authors. Clark pulls all the same tricks Hopkins did in the four novels of hers I read: making symbolic shapes with her verse, hiding deeper thoughts within them, spacing them out to emphasize a point,...

Is it wrong for me to want to see Clark develop her own narrative techniques and play around with verse her way instead of imitating an author she admits she knows personally? It makes Freakboy feel a little less like her own creation, though it never gets derivative enough to be tacky or have plagiarism called on it.

I'm on board for any future novels from Clark because she makes it clear she knows how to tell stories most people don't think about but should, but I desperately hope she comes into her own style instead of continuing to write like someone else.