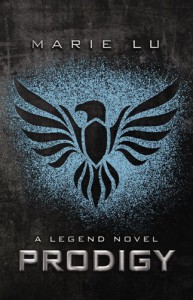 I didn't like Legend. Nope, didn't like it much at all due to the failure to pull off the dual points of view and the ridiculous premise. However, Prodigy is a very different story even though the hype and how almost everyone that has loved it has also loved book one made me worry it would be just another bad book.  Nope! Prodigy hooked me where Legend failed to and made me excited for Champion in a way I never expected.

With their escape from prison/Los Angeles and the way it takes them away from everything they've known all their lives, June and Day have to adjust fast. The conflicts they face romantically as both start to ponder if they have feelings for other people as well as each other and overall as they figure out where they're going next/who they owe their loyalty to are believably written (and very fun, when it comes to the romancey stuff). The basic message I get? Everyone and everything sucks. Both countries are terrible places because there is no pretty utopia and they both have terrible people, but the levels of awful vary and some things/people are far more or far less horrible than others.

June and Day still read the same to me sometimes (my ebook doesn't have colored ink the way the physical copy does) and the explanation behind how their world got to where it is still makes me giggle at how ridiculous it is. But you know what? I don't even care anymore. Good books make me forget all my niggles about character voice, worldbuilding, etc. in order to enjoy the story and that is exactly what Prodigy does. It's a thrill ride from start to finish and never once are any of the assassination plots, daring escapes, and sudden twists boring--and I can easily find that stuff boring. Action movies/books are not my thing until they're so good they are.

Also, the hype behind the bathtub scene? Rubbish. All of it. Gosh, I expected NA-level heat from the way people talked about it and yet it was so tame. They're making out, Day's shirt is gone, and they forget about the bathtub with its running water. The version I had a dream about just before starting Prodigy was a little more, ah, satisfying. What was it like? That's my little secret. Buuuuut it was still a fun scene. The hype killed some of the fun, though.

Thank goodness I bought Champion on a whim when I found a signed copy in Target one day. After that cliffhanger, I want to get to it ASAP and see where June and Day are going to go next. Sadly, review books are standing in my way...for the moment. They won't be in my way much longer because I refuse to wait more than a week or two.