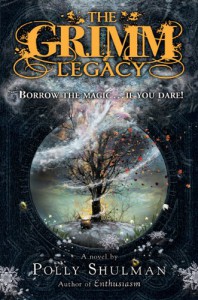 I've owned few books for as long as I've owned The Grimm Legacy. I got it as a Christmas gift in 2010, but it sat on my TBR pile, still looking good but not good enough for me to pick up. It took the 50-page rule to finally make me read it and though it passed that test with flying colors, the book as a whole just barely stayed on my good side. Shulman brings her setting to life, but so many other elements are neglected that it gets frustrating after a while.

The New-York Circulating Material Repository feels like its own character thanks to its multiple levels and the the way everything in the Grimm Collection has a mind of its own. When other parts of the novel started losing their luster, the very Grimm items brought me back from the brink of DNFing it. The mirror from Snow White, for instance? It takes pride in being a jerk and it's almost always entertaining. The way many of the objects require rhymes to make them work/listen provides plenty of entertainment too. The author once worked in the New York Public Library and her experience shines through in the very best way.

Even though this is YA, this reads a middle-grade novel--no, the stereotype of a middle-grade novel. It's fun and whimsical and readable, but the characters suffer in the name of that whimsy and feel half-baked at best. This is one of the most diverse YA novels I've read lately (the best friend Anjali is Indian, her love interest/our heroine's crush Marc is black, and there are many other examples I could name) and that's a step in the right direction, but they need depth just as much as they need diversity.  Elizabeth and her friends sound so young that I regularly forgot all of them are in high school. It's on the very, very low end of YA at best.

Because of their lack of depth, I felt indifferent to most of the characters. The one exception was Elizabeth's love interest Aaron and that is because he is so repugnant that I wanted to throw him in the pit I reserve for horrible love interests. He's consistently rude to Elizabeth up until the end and he is far from earning my forgiveness for how he treated her. Another annoying thing he does? He always blames Marc for the theft of magical items. It reeks of "THE BLACK GUY DID IT BECAUSE I DON'T LIKE HIM" and it's just really, really bad. Not as bad as gross exotification one antagonist displays toward Anjali and Marc, but still awful.

The plot itself is a little confusing. The theft of the items and how they're being replaced both come together too easily, as does the solution. The stakes never feel like anything worth worrying about either. Only when someone gets turned into a figurine does it get interesting and by that point, my irritation at the undeveloped story at characters kept me from really caring about it the way I should have.

Though I didn't exactly this like this, it's far from my last brush with Shulman's work. Her first novel Enthusiasm includes an Ashleigh and that makes me honor-bound to read it. Support the Ashleighs! Anyway, if you want something magical and middle-grade-ish, The Grimm Legacy is a decent bet.